We were just a tiny bit afraid of bears, Caroline and I. We knew they were here, lurking just out of sight.  And although I knew that bears could be dangerous, I felt disappointed that we probably would not see one rising up on her hind legs to shield the cubs she had borne during the winter’s hibernation.
How clever the she-bear. She goes into winter retreat and has a long, restful Sabbath. She sleeps through the really uncomfortable, cumbersome part of her pregnancy. She comes out renewed with her cubs, who have found their way into the world at winter s end. The bear is mythologically feminine. The name of the Greek goddess Artemis, the huntress, means  bear.  She embodies the wisdom of the wild. She symbolizes the intuitive that relies on its own inner experience rather than patterning itself on the experience of others. The bear walks on a path of her own. She dares to question. And she dares to believe. She fights for her children. She is brave and strong, maternal and defiant. She is a wily survivor. She is also a strong genuine archetype for me
I once had a dream about the feminine. I am riding in a truck with a man who has twin toddlers, a boy and a girl. He tells me that the boy is a joy, he does everything according to the books. But the girl is a little terror. She has a mind of her own and is temperamental and unmanageable. As we speak, the little girl climbs onto the back of the truck and begins to dance. We hit a bump and she flies off, falling into a hole in the ground. We stop the truck and the father comments that she has gotten what she deserves. I look down the hole, which opens into a large cavern. She is inside, unhurt. It takes me a full day to dig down to her. When I reach her she is exuberant and unafraid. Still dancing.
Women s spirituality is as wild and free as that little girl. It is natural, earthy, relational, mystical, embodied, intuitive, sensuous, and compassionate. Slowly but surely, women s poems, psalms, songs, and liturgy are being written and prayed, sung and danced in a way of our own, suitable to a path of our own. We are digging back down to ourselves.
Like the she-bear, we need Sabbath. Most religions include one; Jews on Friday evening to Saturday evening, Christians on Sunday, Hindus on Tuesday, Muslims on Friday. Some American Indian tribes celebrate Sabbath on the day of the week that follows winter solstice, the New Year. Whether our Sabbath is a day or an hour, a prayer, a breath, or a meditation, we relax for a time and listen in the stillness for the inner voice. In the quiet, our intuition rises, sniffing the winds like a curious cat. These are the times when we are awake enough, alert enough, present enough to see the path as it opens before us .  For the truth is, no one has ever walked our path before.

Read the whole thing again, out loud, with a friend.  And stop when you come to a part that inspires you, says what you feel or think, is something you resonate with, or that you just want to talk about.  Where two or three are gathered, powerful, transforming, deepening things happen.  And when we speak, even more so.

Maybe it’s the Sabbath and hibernation part that got your attention.

Maybe it’s the mythology of the bear being feminine, and all the attributes she embodies, that you embody.

Or maybe it’s the story of the man with the truck and the little girl and little boy…and his perception of them…and yours.  Maybe you know a pair like that.  I do; they’re twins.  And I can so hear them being described like that some day.  And the little girl I know is a dancer, too…

Whatever it is that calls to your attention, follow it; talk about it.  Embrace and own the aspects, the powers of bear, that feed and fuel your spirit.

Blessings as we enter the season of winter.  – Anne 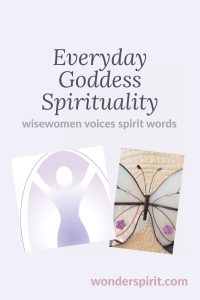